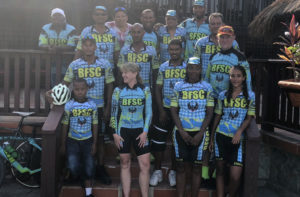 Team BFSC Belize had a successful Cross Country Race with Derek Smith Leading the team with a top ten finish in the A Division in a field of 60 riders, Derek thanked his teammates, Charles, Arden, Andrew, Gilroy for their support throughout the race. andrew Vasquez picked up a station prize along the way! Derek was is a great position in the sprint and had a narrow hole to thread to move up but wisely chose to save it for another day. Derek is in form for a win in the near future.

Lisa Berger finished 5th in the C Division Followed by Ed Siyah, Anthea and Ingemar. The team enjoyed a get together at the Radisson hotel after the race! Thanks to Judy, Curtis, Richard, and little CJ (future racer) for the road support!